The REORIENT project assessed the process of transforming the European railways from nationally fragmented into internationally integrated rail operating systems as a consequence of the EC interoperability legislation. By so doing, it supported the EU policy of balancing modal split between road and rail freight transport. 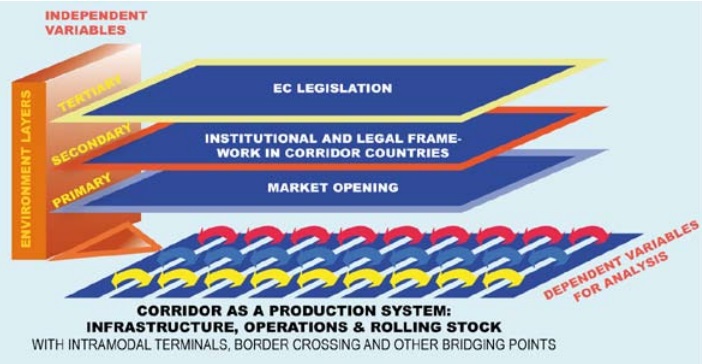 The project was divided in two parts. In Part A, REORIENT selected two trans-European freight corridors for in-depth exploration of interoperability status in countries located along these pipelines. After that, it assessed the target countries’ political and administrative structures responsible for interoperability implementation and to identify barriers encountered in this process. It captured progress in interoperability between country blocks in order to define their ability to remove the inter-rail discrepancies. Since interoperability requires significant investments, REORIENT established the scope of strategic freedom that political decision makers in these countries enjoy as regards ability to channel scarce national resources to rail interoperability instead of to other social needs. This was paralleled with investigation of quality standards that guide shippers’ modal choices in order to determine what quality levels the rail (intermodal) service suppliers need to secure for closing the quality gap between the truck freight transfer and for attracting freight volumes from road conveyance.

Part B of REORIENT used this knowledge to propose several measures designed to remove, circumvent and/or neutralize the interoperability barriers. Further, it evaluated the effectiveness of different policy strategies as regards distribution of welfare and negative externalities among different classes of social actors. In addition, REORIENT created a Knowledge Base, which served as a repository of information, data and outputs from its analytical work and supported the Commission in formulating the terms of reference for the Integrated Project. Knowledge Base also created a business case that may serve as decision support for investors bidding for the Integrated Project.