Full speed ahead… into the world of self-driving cars! 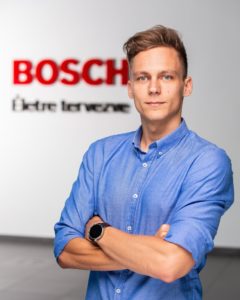 Two years ago, the first Autonomous Vehicle Control Engineer master’s degree was launched at the Faculty of Transport Engineering and Automotive Engineering of the University of Technology and Economics, which aims to train engineers to develop autonomous vehicles to meet the challenges and needs of the automotive industry.

– Was engineering a childhood dream or did you choose this direction by chance?

– I was originally going to be a lawyer, but then in the 12th grade, I realized I didn’t want to spend the next years booking, and I’ve always been interested in technical things, so I chose mathematics faculty and graduated from high school. I applied to the BME Mechanical Engineering Faculty for Mechatronics BSc program, and I successfully got into it. At the end of the bachelor’s degree, I heard that in September 2018 a new master’s degree in English will be launched in English called Autonomous Vehicle Control Engineer (AVCE) at the Faculty. Given that I was going to finish in January and didn’t want to miss six months between degrees, I applied for an Erasmus scholarship, which would have given me a wonderful six months in Scotland. Here, in addition to the subjects I took, I was able to deal with my own research project and also deepened on renewable energy sources.

– After Mechatronics BSc, why did you choose autonomous MSc?

– I find the subject interesting and innovative. I’ve already done a lot of basic training on robot management systems, and I thought managing autonomous vehicles, designing, developing and testing these systems would be an exciting challenge.. Therefore, after admission, during the summer, I contacted Tamás Bécsi and Szilárd Aradi at the Department of Transport and Vehicle Management, who I managed to convince to join a pilot project with their supervising .

– How has the last 2 years been at the Autonomous Vehicle Control Engineer MSc?

– I certainly didn’t have a lot of free time. Although this is mostly because of the fact that I continued the project that I have started before the program, and the research carried out here became the basis of my TDK and later my thesis. Plus, in addition to school, I worked first 1 day a week, and later 20-25 hours a week at Robert Bosch Kft. in Budapest.

– This means that three areas had to be covered at the same time. Could you?

– I think so, yes. When I applied, I was going to start a dual training course in cooperation with Bosch, as well as the other specializations, for which I applied immediately. However, due to administrative problems, AVCE dual training did not start. Even so, thanks to a very helpful HR staff, I was able to start working for the company, and I don’t regret it. I’ve been in a group where I’ve been designing autonomous vehicle driving styles and behavior prediction for 2 years. Exciting, challenging work, the team is also great, and I can honestly say that it is an extremely useful addition to university education and its practical use.

In the university research project, we study the movement planning of autonomous vehicles with machine learning. This was also my last TDK topic, and I developed it further in my thesis. In a highway environment, we run random simulations where the self-driving vehicle tries to learn the right behavior.We use the artificial intelligence reinforcement learning method, which can be compared to children’s learning. The control center learns to acquire the expected behaviors with continuous attempts. The varied environment and continuous feedback make its behavior closer to the optimal results. The video is a demonstration of how the control center performs in different situations.

– These were projects outside the program. But what about the master’s degree itself? 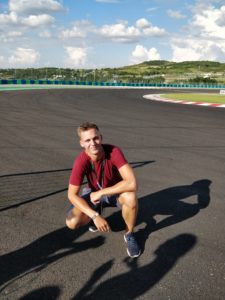 – Since we were the first grade that the program started with, there were initial uncertainties, but overall I think that thanks to the prepared teaching staff and the consistency of theoretical and practical education, we have obtained a really valuable degree. Of course, there have been theoretically focused lectures that are not exactly exciting, but interestingly, most of the knowledge turned out to be – thanks to my practice at Bosch – really essential in the industry

In addition, there were sometimes practices in which we disassembled an entire car engine, transmission and got to know its components better. We were dirty. We were taken to factories  where we could see almost every segment of the automotive industry. We saw the functions and construction of the ZalaZONE automotive test track in real life. Other times, we’ve done spring stress tests, and on the test track in Tököl, we’ve tested steering controls, and I could still list the many exciting places we’ve had the opportunity to visit.

Thanks to the close industrial connection of the Faculty and our lecturers, doors are opened here for students during training that I do not think students can experience at other universities or faculty.

I definitely find the Faculty outstanding, because it has plenty of opportunities for students to join exciting, professionally interesting projects and research. This gives you extra knowledge, information and experience that should not be missed. We can constantly learn new things and participate in innovative projects.

I’m not saying it was easy. Obviously, there were difficult parts, and in my case, parallel work and the research project made it difficult, but overall the requirement can be met with a good schedule and the right determination. I think it’s worth fulfilling, because that’s the future of the automotive industry. In a few years’ time, the most reputable industrial participants and companies will be looking for autonomous vehicle management engineers in many cases instead of traditional vehicle engineers.

– Is this really the future? Self-driving vehicles?

– Within a few decades, surely, as there is a demand for it. On the other hand, the changeover will not be fast. You shouldn’t think everything will change overnight. Just think how many Teslas with self-driving features are in town, while you can still see Trabants made in the ’70s on the road. Self-driving cars will be the same; they will drive standard vehicles at the same time for a long time. At the same time, the price will have a significant impact on their uptake, so as long as the technology is not cheaper, it will not be available to masses. On the other hand, we are working on researching and developing the safe, affordable and efficient transport of the future, the world of self-driving vehicles, as soon as possible.

– This is where the future of transport is going. And what about you? What else can come after the winning TDKs, publications published in prestigious international and domestic journals?

– Honestly, these two years of work, research, and master’s degrees at the same time have been tough. Besides, I don’t mind because I’ve learned a lot from all of them, but now I want to focus on fewer things. I’m continuing my studies and research at the Doctoral School of the Faculty of Transport Engineering and Vehicle Engineering, where I’m going to do my PhD. My topic is the motion design of autonomous vehicles with artificial intelligence. This gives me plenty of opportunities to delve deeper into the topics I have already learned and loved and acquire competitive knowledge.

– Thank you for the interview, and good luck with further researches!